The Museum of Rexburg is located in the basement of the Tabernacle houses the Upper Snake River Valley Historical Society Museum. This museum has aptly been named the Teton Flood Museum because of its extensive collections of flood memorabilia including but not limited to films, photos, and other items related to the Teton Dam disaster. The upstairs of this building is used as a civic auditorium which seats 1000 people. The tabernacle is known for its amazing acoustics.

There are many pioneer relics, depicting the lives of early pioneers, an Idaho opal/agate collection, North American animal head collection, World War I and II items and much more.
History was written in the landscape of the surrounding communities by the scouring floodwaters of the Teton Dam on that fateful day, June 5, 1976. Much of the damage has been rectified but there are still tell-tale signs of the overwhelming devastation caused by the flood that can never be erased such as a high water line. This line marks the entrance to the museum indicating the level of flood water from the 80 billion gallons of water that came through Rexburg. Exhibits have been made possible through many donations, memberships, and other support of the museum. Many one-of-a-kind items are housed here.
This museum also houses the Rexburg Children’s Museum. Both the Museum of Rexburg and the Rexburg Children’s Museum open new exhibits and activities each month.

The Legacy Flight Museum formed from a notion of John Bagley. In 2006, this idea came to life. His goal is to give people the opportunity to get up close and personal with… 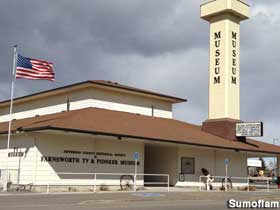 Did you know Philo T. Farnsworth who was born in Rigby, ID had a hand in the invention of the Television? Come and see for yourself. The Jefferson County Historical Museum features 14,000 square…