It was purchased by the Egbert family in 1963 and converted to an old-fashioned melodrama theater  “Pierre’s Playhouse” which lasted for 44 years. The theater closed down at the end of the summer of 2006 and remained closed until it was reopened in February 2010 once again as a movie theater. In between closure and reopening, the building was refurbished.  We are the only indoor theater in Teton Valley, Idaho. 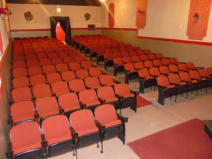 Get on Hwy 33 and travel about 52 miles to the town of Victor ID. “Pierre’s Playhouse” will be on the right-hand side.